Today I stopped at no less than three Ace Hardware stores, trying to find aluminum spacers for my elevator center bearing.  I knew they had them at the Ace I went to over the weekend, where I got the pieces to make my drill bushing.  I just figured – quite incorrectly, as it turns out – that it was just something I could find at any old Ace.  Wrong.  I found one near my office and went there over lunch.  No aluminum spacers.  I considered calling around to find a convenient store that might have them, but in the end I decided to just go where I knew they were.  Unfortunately this meant sitting in lots of annoying traffic…and I was in said traffic when I spotted an Ace (not the one I was going to) in a strip mall.  I pulled in there, hoping for success…nope.  And now I had to get back out into traffic, ARGH.  Finally I got to the third Ace, got what I needed, and headed on home.

My idea of using feeler gauges worked great.  I stacked them until I’d filled the gap, then used the calipers to get the dimensions and set a “reference,” and went to town on spacer #1.  This time I used the bandsaw to make the first rough cut, then used the file followed by emery cloth to get the piece to where it would just fit into the gap.  Perfect!  I repeated the process for the second spacer, and I was feeling good about the night’s work!

Now I just needed to install the bolt through the horns, spacers, and center bearing, tighten it in place, and check again for free movement of the elevators.  And that was pretty much how I thought of the task, in a trivial way.  “Oh, let me just install this bolt real quick, no worries.”  What a chore that turned out to be.  See, the holes in the control horns are pretty close to the tube sections that ties into the elevators themselves.  As such, the bolt head and nut were both very close to this, to the point that neither a socket or box-end wrench would fit on it.  And then there’s the h-stab spar in the way as well.  Basically, I couldn’t get any kind of normal wrench on this thing.  I tried a few weird ideas, but none of them worked very well.

Finally, I gave up and decided to make a new tool by destroying an existing tool.  I had an extra 7/16 wrench lying around, quite eligible for sacrificing to the kit plane cause.  I held it in place near the nut, marked a cut line that would make it short enough to work around the spar, and went to town with the hacksaw.  A follow-up on the bench grinder to smooth the edges, and I had myself a nice homebrew stubby wrench.  It worked great, and I had the nut torqued in no time. (Luckily these smaller bolts don’t require a lot of torque, which would have been difficult to deliver with the stubby wrench) 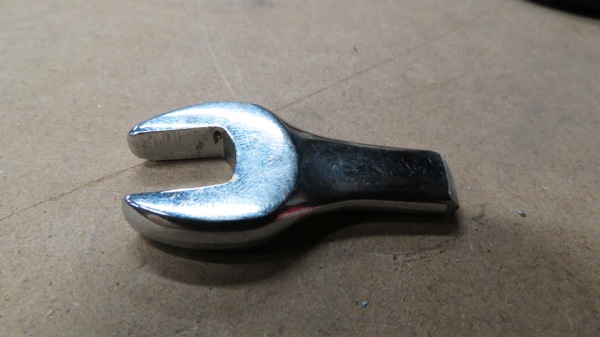 Now that all the attach points were tight, it was time to unclamp the elevators and check for binding.  Those spacers are essential here; if they’re too small, torquing the center bearing will put a side load on the rod ends and prevent free movement.  My elevator, however, swung freely.  I couldn’t even tell a difference from before I had the center bearing in place.  It was also cool to see both elevators move in unison.

This pretty much makes the horizontal ready to be stored somewhere until such time as it’s mated to the fuselage.  I installed the the trim tab and motor just for the sake of keeping everything together, and then decided to move on to the vertical.  First, I pulled the rudder down.  I’d sort of hung it briefly before just for fun, and tried to set the rod end depths correctly, but I only had an analog caliper then, which made me suspicious of my measurements.  So I started by check the rod ends with my new digital caliper – they were pretty close, but I did end up adjusting two of them, just by one turn each.

After pulling the v-stab down and looking at both parts, I decided they should get the same cleaning treatment I gave the horizontal last night, so I went to work with the aluminum polish again and got them all shiny.  Then it was time to try and hang the rudder.  This is a good bit tougher than the elevators; with those, there are only two hinge points to line up, but the rudder has three.  I’d say that the difficulty increases by more than 50%.  I was, however, able to get them in and the pins in place, but it was difficult.  I started to put the bolts in, but had ever more difficulty with that; eventually I decided that maybe I needed to tweak the rod ends a bit.  With three of them, alignment becomes more of a problem than with the elevators.

Once I took the rudder off, it occurred to me that an easy check would be to try and sight down through the rod ends for alignment.  Sure enough, I couldn’t get a good line of sight down all three.  I ended up threading the bottom one out a turn, and the middle one in a turn, and then I could see very well down all three.  I wanted to try hanging it again to check, but it was after 11 by this time and definitely going on bedtime, so I called it a night and went in.

I figure tomorrow I can hang the rudder, set the vertical assembly on top of the horizontal for a photo op, and then figure out where I’m going to store these things.  I have a bare wall in the dining room that’s just the right size for the horizontal.  I’m not sure about the vertical though, both in terms of where and how to hang it.  Guess I’ll have to figure it out soon…