So I’ve kind of been talking myself out of working in the garage the past few nights.  It’s been cold, and the little space heater I bought doesn’t seem to be able to keep up.  Tonight, however, I vowed to get some work done in spite of the cold…and truth be told, it really wasn’t bad at all once I got out there and moving around. (though I did kick the heater on about an hour before I actually went out to work)

Anyway, first order of business was pretty mundane – final-drilling the holes in my shiny new replacement E-606PP trim spar.  Nothing too exciting there, and the same for deburring those holes.  At this point I suppose I could have gone ahead and dimpled/countersunk the spar, but I decided to move on to fixing the trim tab cutout on the elevator.  I started by making a cardboard template to match the outside of my trim tab.  By using this as a starting point for marking my cut lines on the elevator, I could help ensure that I ended up with a nice even gap to the tab when I was done.

Once I’d marked the cut lines, it was time to cut the ears off.  Well, that makes it sound a lot more casual than it actually was.  I was pretty mindful that I was about to take a Dremel to my (mostly) pristine elevator skins, and there was definitely opportunity for parts ruining.  So I double- and triple-checked the cut lines, then checked them again for good measure…and finally there was nothing left to do but actually cut.  So I fired up the Dremel and went to work.  It was actually kind of funny…I kept moving the cutting wheel close to the skin, and then sort of backing off the reconsider.  Finally, I really did actually make a cut.  It was really pretty uneventful when you get right down to it, but there was a lot of anticipation for me. 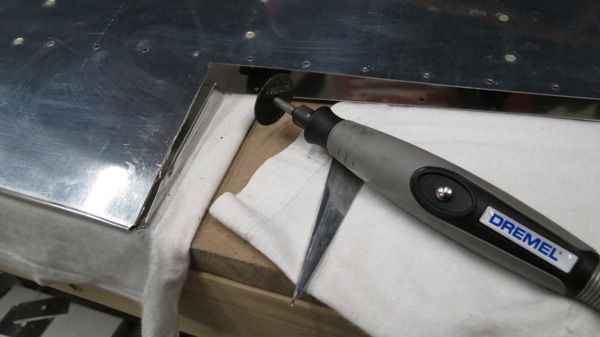 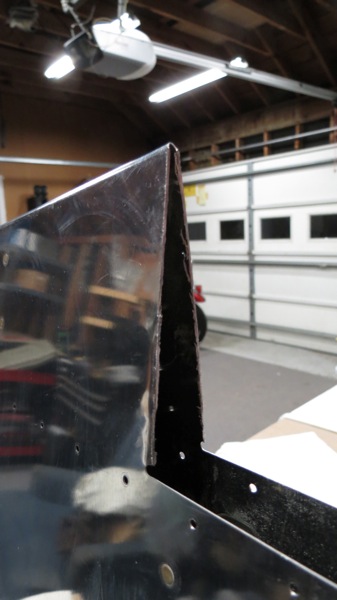 Whew.  Now I had the ears gone, but the resulting edges were extremely rough and not quite straight either.  So out came the vixen file and I spent a fair amount of time easing those edges down, getting them straight, and getting them aligned.  Then there was some further cleanup with a regular file and the edge deburring tool.

OK, now to fabricate the riblet itself.  I generally followed this procedure from VAF, cutting down an E-703 rib to make my riblet.  Some other guys make the riblet from scratch, cutting sheet stock and bending it that way, but I decided to take the “easy route.”  I started by measuring the skin to get a good first-pass idea of how long to cut the rib, then I went to the band saw and made the first cut.  The resulting piece was slightly too long (by design, really), so I ended up trimming a bit more off with the band saw.  As recommended in the VAF thread, I drilled a #30 hole in the rib face so I could use a cleco as a handle.

The rib after the first cut: 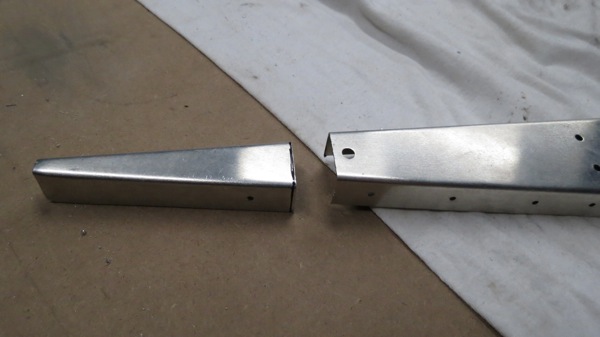 Next I clecoed the trim spar in place on the elevator and worked out the positioning of the rib; sliding it forward or aft changed the way the skin sat, so I had to find a “sweet spot” of sorts to get everything to line up.  That done, I drew my layout marks on the skin, laid out the rivet line, marked the holes, and drilled them in the skin alone.  That done, I put the riblet back in place, clamped it in, and carefully used the skin holes to drill into the riblet, clecoing it in place as I went.

The resulting piece fits quite nicely: 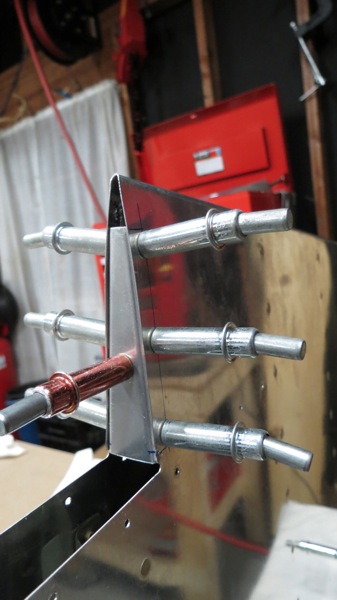 And now the trim tab lies in place quite nicely as well: 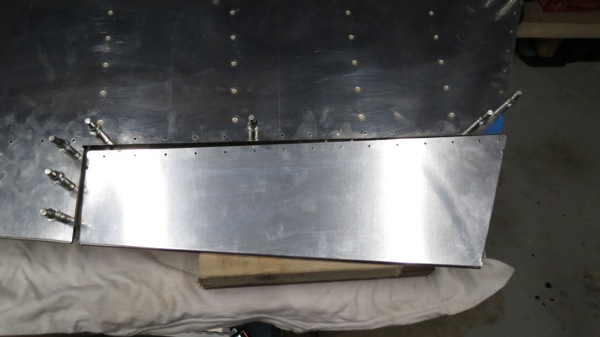 It was nearly 11:00 by this time, definitely quitting time.  So I cleaned up and went inside to the warm zone.  I still have to deburr and edge finish the riblet, as well as dimple and countersink the trim spar; once that’s done, I’m hoping I can shoot primer on everything this weekend and be assembling the elevator next week.  Then it’s on to the really fun stuff: putting the trim tab together, installing the actuator system, and checking function.  In the near future, I get to test the trim motor and watch an actual control surface move…fun times!