This thing’s almost done!  Kind of oddly bittersweet though…at the same time I’m pleased with the progress I’m making, and all the good feelings of seeing a part come together, I’m acutely aware that I’m getting closer to a period of no building while I wait for the wings.  Oh well…worst case, I can always work on the fiberglass stuff while I want, I suppose.

First things first, I still needed to deburr and dimple the elevator skin.  Nothing fancy here, just time-consuming.  I find the edges of skins to be some of the more tedious work; I’m just using an edge deburring tool on those, maybe a file for some of the tight spaces.  I’m thinking I should get a die grinder with a small scotchbrite wheel for some of these edge finishing tasks that don’t really work for the bench grinder.  I also went ahead and drilled the leading edge holes to #30; even though the instructions call for doing this after rolling the edges, I don’t like the idea of trying to hold that stuff in alignment, or the inability to effectively deburr the holes, or the drill shavings maybe getting inside the elevator.

Also, while doing the deburring and dimpling, I took a look at the pieces I primed yesterday and found a couple spots I wanted to touch up.  So in between working on the skins, I shot some primer in the driveway.  In order to speed drying, I resorted to hanging the pieces in front of my radiant heater once the primer had flashed dry.  This seemed to work well; when I worked with the pieces later, I noticed no problems with primer coming off in the areas I’d touched up, so I guess it hardened sufficiently.

Next up, riveting the E-704 and -704 tip ribs together.  These just sit together back-to-back and go together with some 470 rivets.  I decided to use the rivet gun on these, but for some reason the rivet set was really banging on the rib itself; I had a little ring of missing primer around each of the manufactured heads.  I found this odd, but for some reason my brain didn’t make the connection that maybe I was doing something wrong.  So I just took the new assembly out in the driveway and shot some more primer to fix those rings.

I moved on to riveting the reinforcements and nutplates to the spar.  I shot the first rivet, got the same ring around the manufactured head…and suddenly, I had an idea what the problem was.  Yep, I grabbed the wrong rivet set, I was using the set for -5 470 rivets.  That’ll do it…derp.  Swapped it for the right set, and magically all my subsequent rivets looked great!  Of course, I had one more spot to touch up with primer…and the next step was to start riveting ribs to the spar, which had wet primer.  So once again, I set my parts in front of the heater, and went inside to warm myself up a bit and have some food.

An hour later, things started really coming together.  I riveted the tip rib assembly to the spar, then flush-riveted the root rib to the spar.  It felt kind of odd to use 426-3 rivets on understructure, even though I understand the purpose…the control horn goes on top of this area.  Those control horns were the next item; 12 rivets squeezed and they were done.  Next the instructions say to rivet the E-713 counterbalance skin to the elevator skin.  That sounded a little odd to me, but a look at the plans made it all clear.  Most of the rivet holes where the elevator skin overlaps the counterweight skin also go through the tip rib or spar, and can thus be squeezed with everything together, but two rivets on each side only go through the two skins.  These two rivets would be inaccessible once everything was together, so riveting them first allows the use of solid rivets instead of blind rivets. (though I did notice that the plans specify optional blind rivets for those holes)

One thing the instructions didn’t specify prior to putting the skeleton in place was putting the dabs of RTV in the trailing edge where the stiffeners overlap.  I didn’t forget the need for this though; I put my dabs in before getting started with the counterweight skin. (which would have made it a lot harder to get back to the trailing edge)  I also gave the insides of the elevator skin a good wipe down with acetone before buttoning up.

Now the skeleton went into place, and it was a simple matter of just squeezing a bunch of rivets around the perimeter.  The main (minor) issues I had here were getting  the assembly on the workbench in a stable position so I could squeeze.  Since the counterweight was already in place, the thing really wanted to try and flop off the table.  Some creative use of wood blocks and boxes of clecos (to weight down the trailing edge) got me through this.  As with the rudder, I didn’t have any good way to use solid rivets in the tight spots at the trailing edge, so for the last rivet on both the root and tip ribs, I drilled out to 7/64 and used MK-419BS blind rivets.

This seemed like a good time to stop for the day; I’ll get Josie out maybe one night this week so we can get the leading edge rolled.  Or I could just wait and roll the leading edges of both elevators at the same time; this is the way the instructions seem to indicate.  I’ll have to have both elevators out once I’m done anyway so I can fit them to the horizontal stab; I suppose I could just do the leading edge rolling and other fitting tasks on a weekend day.  I’m not quite sure what I want to do, actually.  Maybe I’ll wake up tomorrow morning and come to a conclusion.

This is the tip rib assembly that I fouled up using the wrong rivet set, just after I shot some more primer to fix the lovely rings I made. 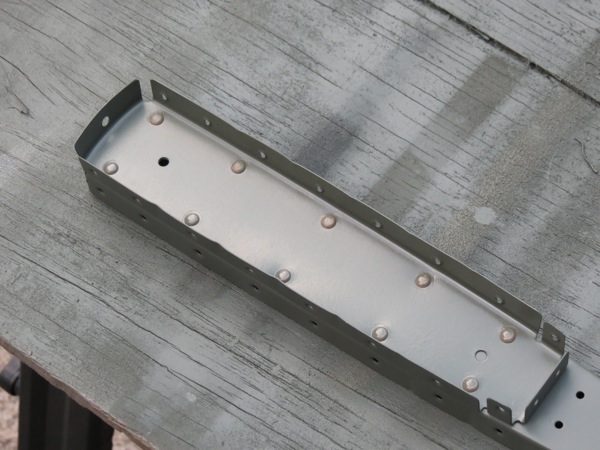 Here’s a blurry photo of the skeleton. (the photographer in me is annoyed with this picture.  Oh well.) (Also, that back corner is horribly cluttered. Definitely going to be another garage cleanup day in my future, before the wings arrive.) 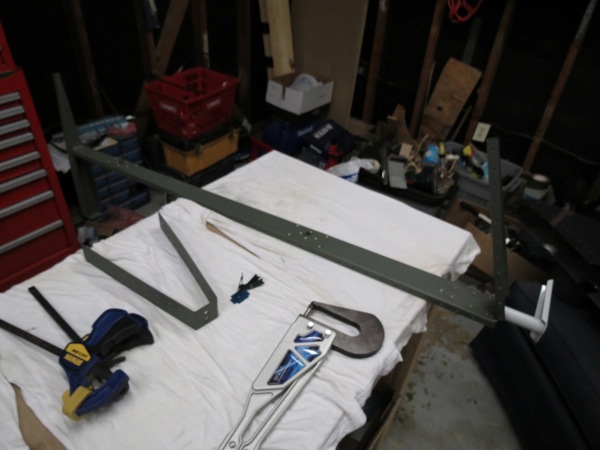 And the (almost) finished elevator! 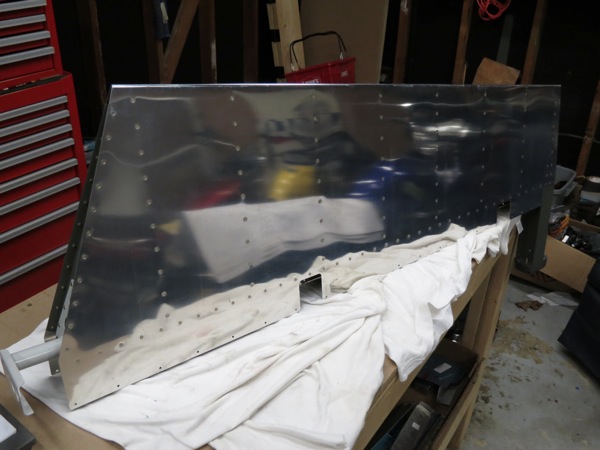