I did not, in fact, get the rudder completely riveted today.  I’m starting to think that it might be fun to keep track of every time I say “I’m pretty sure I can get XYZ done tomorrow evening” and I end up being horribly wrong.  I guess it’s a good thing that I’m amused by this instead of being annoyed.

Weather was good this morning, so I was able to get the parts primed.  I also still had to finish deburring and dimpling the rudder skin; I figured I could effectively multitask these things, and it worked pretty well.  Put some pieces on my priming board, shoot primer, go inside and deburr a couple edges, back out to the driveway, shoot more primer on any thin spots, back inside, etc.  In this way I had all the deburring done by the time all the skeleton parts were primed.  The only unexpected thing that came up during this time was drilling the holes for the leading edge of the rudder.

The instructions don’t mention anything specific about final or match-drilling these holes, but since (to my knowledge) all of the fastener holes are undersized from the factory, I figured that they would probably need attention.  And since I was already deburring holes, it would be easier to final drill them and deburr them the same time as everything else, unless there was some compelling reason to wait.  I checked the prepunched holes against the called-out blind rivet-yep, definitely undersized.  So I went ahead and final-drilled them to #30.

Dimpling the skin-skeleton holes was the last step before starting assembly.  The instructions start with putting together the tip rib assembly; first riveting the counterweight skin on before fitting the rudder counterweight.  Here, I committed my first mistake of the day.  Since I had added the doubler on the leading edge after splitting that flange, I knew that I was going to have to figure out for myself the proper rivet length.  The plans called for an AD426-3.5 rivet, so I grabbed the next longer length, a -4, and dropped it into the hole.  The old Mark I eyeball said that the tail looked long enough, so I proceeded to squeeze it.  Hmm, looks a little small.  For some reason, my brain didn’t register that there was a problem until I squeezed the second one.  Even then, it didn’t sink in just how horribly undersize the shop heads were until I started squeezing the rest of the skin-rib rivets.  With proper shop heads to compare them to, it was painfully obvious how inadequate those two rivets were.

They don’t even cover the edge of the dimpled doubler: 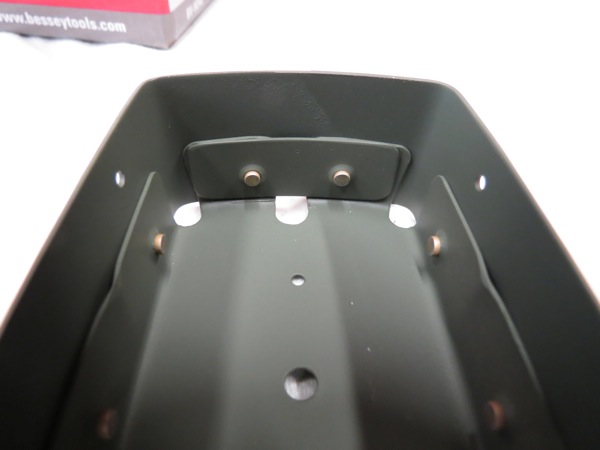 At this point, I had to stop for a bit; Josie and I had plans to catch a one-time showing afternoon movie at a local theater, so I got in a shower and we departed for a few hours.  When I came back, I got those offending rivets drilled out and replaced with -4.5s.  Much better.

On to the counterweight itself.  The two mounting holes in the tip rib have to be enlarged to #12 and dimpled for a #10 screw, and the counterweight has to be countersunk under that same dimple.  Here I ran into another issue: in the tool list Van’s published, they list a dimple die for a #8 screw, but not a #10.  I sort of saw this coming; when I was researching some other issues a couple days ago, I found that other builders had run into this same problem.  Several folks had simply used the #8 dimple die, then enlarged the dimple to final size using the screw itself as a die and the countersunk weight underneath.  This worked well for me as well; I felt a little weird about doing this ghetto dimple, but hey, it works.

Now to start assembling the rest of the skeleton.  First up, I riveted the upper two reinforcement plates to the spar.  These are found at each point where the rudder hinges attach; there’s just a doubler plate as well as a nutplate which the rod end bearing which serves as the hinge mounts.  These were pretty easy, except for the part where I riveted the first nutplate to the wrong side of the spar.  I could have been mad, but in truth I actually found it hilarious, simply because it was such a dumb mistake.

Next up, the lower end of the skeleton, probably the most complex part of the assembly.  Lots of pieces are attached here: a spacer strip, the root rib, the lower reinforcement plate, the nutplate for the rod end, the rudder horn, an the rudder horn brace.  Following the instructions, I clecoed everything except for the horn brace into position.  Shooting all those rivets was pretty easy; next I slid the horn brace into position, and immediately realized this was going to be interesting.  There are four rivets between the brace and the horn, and one side of this joint is inside the brace, accessible only through the lightening hole in the brace.  How in the world was I going to squeeze solid rivets in there?  My squeezer wouldn’t reach in there; well, maybe with a longeron yoke, but I don’t have one of those.  Maybe I could buck in there if I had a small tungsten bucking bar, but…yeah, don’t have one of those either.

Then I consulted the plans again and found some useful information: it’s apparently acceptable to substitute LP4-3 blind rivets here.  Hooray, I’m no longer at an impasse!  That sense of jubilation didn’t last long…I only have two LP4-3 rivets from the hardware bags, and I need four.  Well, this is a good time to call it a night anyway.  I figured I’d order the required rivets from Spruce; they’d be here Tuesday and I’d hardly miss a beat.  Oh wait, Spruce doesn’t have this particular rivet.  But VAF came in handy again, as I learned that Cherry MSP-43 rivets are an acceptable substitute, and Spruce does have those.

I also learned something else useful: Four skin rivets on each side at the root also have one side inside that horn brace.  The plans call out a CS4-4 blind rivet as an acceptable option, which sounds good to me.  What I hadn’t thought about until I read some posts on the subject is that those are -4 rivets, and thus need a larger hole.  So if I’m going to use them, I need to enlarge and re-dimple those holes now, before I put everything together and they become inaccessible.  I’ll almost certainly be using them, given the likelihood of fouling up solid rivets in those holes…glad I found this out now!

I’m starting to notice that as the empennage build goes on, the instructions are becoming less and less specific.  There’s a lot of hand-holding early on, but now there are extra little details that aren’t always spelled out, things that would be clear to a knowledgable builder.  My understanding is that this trend continues into the following kits, probably because the instructions would be a giant book otherwise.  So it seems as if the empennage instructions are gradually “teaching” me to figure things out myself and catch potential pitfalls before they become problems.  Nice.

I guess I’ll see you all back again on Tuesday, once my stuff from Spruce shows up.  I might even finish the rudder that night. (WHY DO I KEEP SAYING THESE THINGS?!?!?!)