Went right back to work on the port stab today.  Over my lunch break, I made a run over to Harbor Freight Aviation Supply to see if they had a blind riveter with a smaller head.  Turns out they did.  Plus, the head also swivels, which might come in handy for some odd places in the future.  For $9, I think I can get my money’s worth out of the thing.

Once I got home, a bit of experimenting confirmed that my new riveter would work just fine for the current task.  I recruited Josie to come hold the stab in a better working position, and the three blind rivets were set in no time.  Next step was to start riveting the HS-702 spar and HS-708 main rib.  This was by far the most flush rivets I’d set.  At first I had Josie helping me by bucking while I ran the gun, and we had a decent rhythm going.  But she wasn’t feeling totally great, and had even stayed home from work, so after about 30 minutes she (rather apologetically) went inside.  I found that the spar rivets weren’t too difficult to shoot solo, so I shot the rest of those myself.  I was able to get Josie back out to help with the rib rivets, which were a bit too awkward to comfortably shoot solo.

Out of all that, I only had one rivet that had to be drilled out; I apparently let the bucking bar slip and the shop head started to fold.  But I caught it early enough that it was easy to extract, and I didn’t damage my skin at all!

It was getting pretty late by this point, so as much as I would have loved to move right on to the starboard skin, it was quitting time.  I also would have merrily squeezed the rivets on the ends of the stab, but instructions have you leave these for last, once the rear spar is clecoed in place.  Not sure what the reason for this is, but I don’t have a good reason to depart from the instructions, so I won’t.

Tomorrow evening is free as well, and it’s a work-from-home day for me.  I’m hoping to get out in the garage early and get all these steps repeated on the starboard skin.  Once that’s done, I’ll pretty much be home-free on my first assembly! 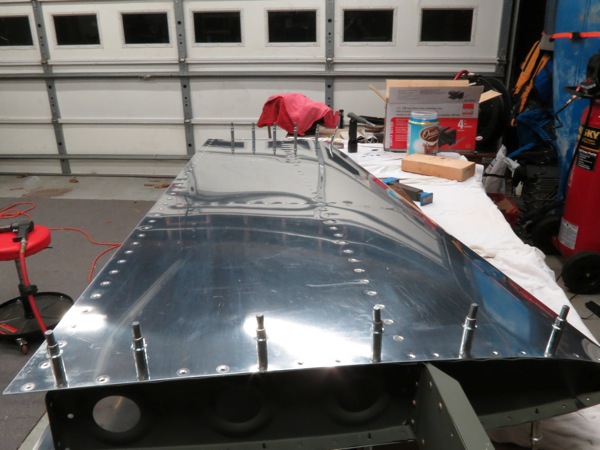 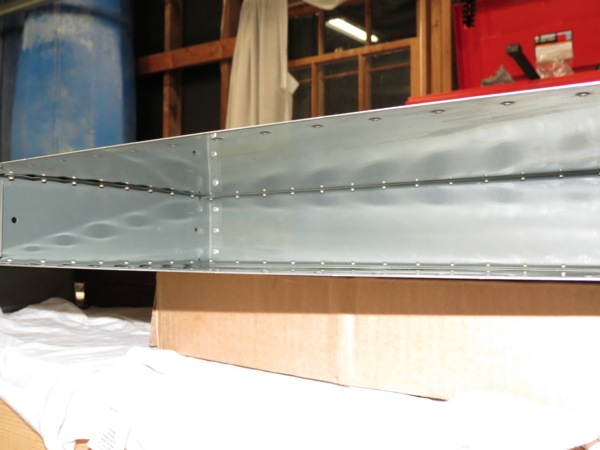